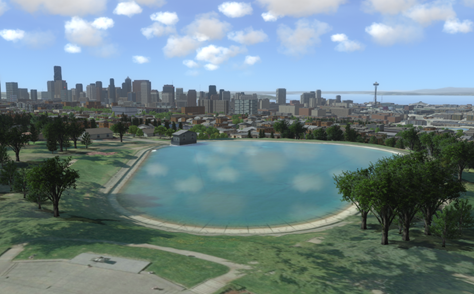 For this month's tech tip, we'll cover how to configure your environment to make scenarios richer and more realistic by adding specular reflections to inland water. Specular effects produce the shiny, reflective water surface that you're used to seeing in the real world. Since inland water terrain is usually just a flat area of elevation with an image of water, adding specular reflections increases realism and provides an important visual cue for aircraft.

The quickest way to create a specular effect is to include the osm.waterTextures.xml to your earth file. This adds a specular image based on OpenStreetMap inland water areas. Here's what that looks like: 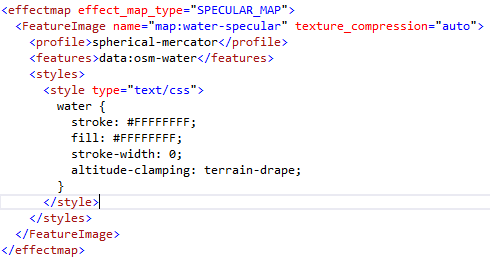 Let's take a closer look at the XML snippet above:

So how can you extend this to use your own data? An important constraint is that only one effectmap of each type can be in an earth file. One approach is to merge your own water area features into a single file (e.g. Shapefile or Geopackage) and reference it as a feature layer. You could directly replace the <feature> line with your feature definition or make a separate feature XML file and reference it by name. (Your data may not need the spherical-mercator profile line.)

Interested in learning more about specular effects or other ways to configure your world to be richer and more realistic? Let us know at !